The ultimate sundowner has to be watching the sunset while sipping a cool drink, accompanied by ambient music and breathtaking sea views. It’s one of Menorca’s most memorable pleasures that can’t fail to impress. 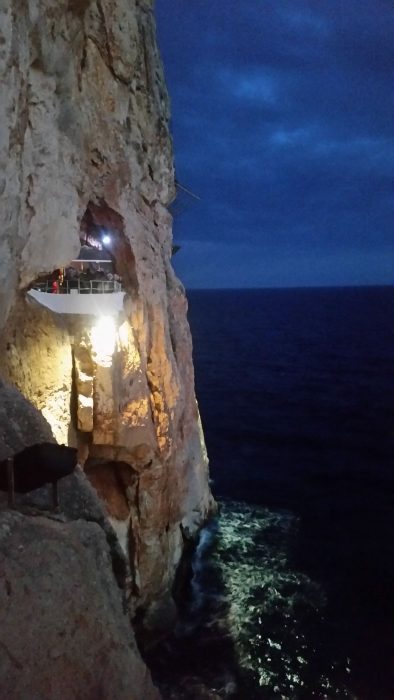 The natural caves, 25 metres above the sea, are considered one of the finest venues in the world and watching the sunset, sipping a cool drink, is one of the most memorable pleasures on the island.

Cova d’en Xoroi aims to offer the best range of music with internationally famous artists. It is open during the day for drinks accompanied by ambient music and magnificent sea views. It then transforms itself into a very popular night club at 23.00 with live performances and DJs playing all the latest club music until sunrise.  Not to be missed for a great evening out.

Cova d’en Xoroi is open every day May to end September (weather permitting). and an entrance fee is charged. Dress code: smart casual. Opening times are subject to change as the summer season progresses, so it is best to check beforehand.

Ambient session from 18.30 until 21.00, from May to end September (weather permitting).  Tables on the terrace to watch the sunset can be reserved, details and price on request, see below. 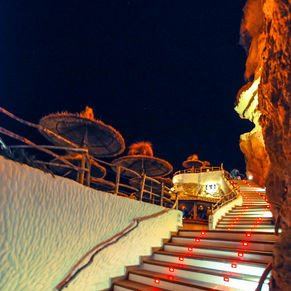 The nightclub starts at 23.00 until 06.00 in the morning, from May to the end of September (weather permitting).  Dress code, smart casual. VIP tables can be reserved, details and price on request, see below.

Look out for special promotion cards in venues (bars, hotels, shops etc) and at beaches around the island or if you visit the caves earlier in the day, which give a discounts for entrance to the nightclub. Promotions are also published on Facebook.

For more up to date information on opening times, prices, special events and themed nights visit their website:

THE LEGEND OF THE CAVES:

These rocks, guard the legend of a love story.

Xoroi the Moor: a man from an unknown past, who  came from the sea, nobody knows how, perhaps a pirate, the sole survivor from some shipwreck, who found refuge in the cave. Nobody knew of this man but at the same time many of the surrounding houses were often robbed. From one of these houses, a young woman about to be married disappeared.

The months and the years went by…Nothing more was known of the missing girl.One day in the winter, the island was blanketed by unexpected snow. In the snow,  footprints appeared.armed men following the footprints which went down into the Cave.There, in the cavern, they found a man, a woman and their three sons. Xoroi, on seeing himself surrounded and powerless, threw himself into the sea followed by his eldest son. The sea that had brought him, closed over them both, guarding the mystery of his life.  Inconsolable, the woman and her two sons were taken to Alaior where they carried on with the rest of their lives. The legend lives on – they say that there are still descendants living here in Menorca!