The multitude of colourful decorated boats start to gather at the Naval Base on the north shore of theharbour in the late afternoon where the Statue of the Virgen del Carmen is kept in the chapel. Around 19.00 hours, a group of sailors collect the statue and take it to the waterfront accompanied by choir music and singing. A short blessing is said before the statue is placed on board the fishing boat that is to lead the procession, along with members of the clergy, dignitaries and guests. 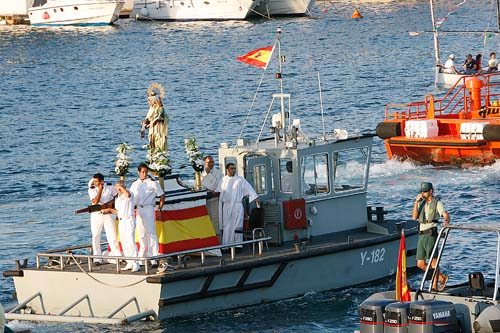 As soon as the lead boat sets sail the other decorated boats follow, escorting the lead boat to the harbour mouth and making as much noise as possible with music and horns blasting out across the water. Once at the harbour entrance, a beautiful wreath (previously blessed on the waterfront), is thrown into the sea in honour of the patron saint and in memory of fishermen and sailors lost at sea.

All the boats then return to the Naval Base, where the official anthem of the Spanish Navy ‘Slave Marinera’, (loosely translated as ‘Salutation of the Seas’), is sung and the Statue is returned to the chapel. There is music and dancing on the harbour side and festivities carry on into the night. The procession has been made even more spectacular with the revival last year of the old tradition of lighting bonfires at intervals along both sides of the harbour. And, adding to the atmosphere, there will once again be the Mercado Marinero del Carmen (Mariners Market) taking place on the port throughout the weekend with entertainment, music and fun for all the family. 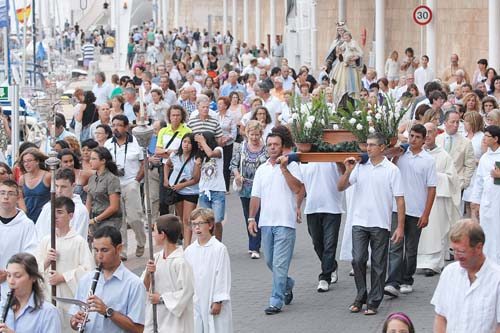 The festivities begin the evening before on Saturday 13 July at around 22.00 hours in the Pla de Sant Joan at the far end of the harbour with ‘Habaneras’ (traditional seafarers’ songs), music, dancing and a great atmosphere. The next evening, Sunday 16 July, Mass is celebrated at 19.30 hours at the church of Sant Miguel in memory of past fishermen. Meanwhile, the boats gather in the harbour and get ready for the procession. At 20.15, the Statue of the Virgen del Carmen is carried down to the harbour by a small procession of clergy, town dignitaries led by the Municipal Band. The group, including the statue, members of the Fishermen’s Guild and the Band, board the fishing boat that is to lead the fleet.

All types of boats join the procession, including little llauts, tourist excursion boats and motor boats all brightly decorated with flags and bunting and everyone dressed up for the occasion. Once the last member of the official party is aboard, the lead boat makes its way down the narrow harbour to the noiseof sirens, whistles and cheers. 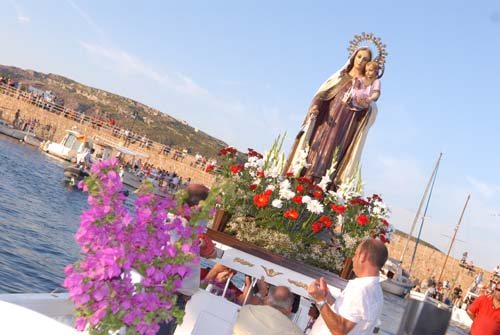 Once at the harbour mouth, the procession falls silent while the traditional wreath of flowers is blessed and thrown into the waves in honour of the patron saint and those lost at sea. Everyone watches in silence as it and floats away, then the band strikes up and the boats start to make their way back down the harbour. The emotional hymn, ‘Slave Marinera’, sounds out from Club Nautico and the waterfront is lined with people along the harbour wall. The evening ends with a reception for the lead boat. 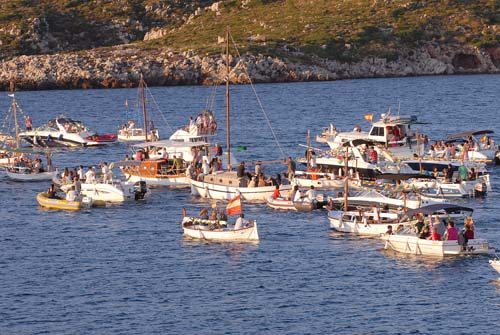 The Menorcan fishing village of Fornells on the north coats celebrates the Fiesta of the Virgen del Carmen on the actual saint’s day. The celebrations start on the evening before, Monday 15 July, with music and dancing on the harbour front .

The next day, 16 July, Mass is held in the parish church of Sant Antoni Abad at midday. At 19.00 hours, the local dignitaries gather at the harbour for the local priest to bless the beautiful wreath which is placed upon the fishing boat that will lead the maritime procession. Once aboard, the party of brightly decorated boats makes its way to the harbour mouth where, watched in silence, the wreath is cast to the waves in memory of the patron saint and fishermen who have lost their lives at sea. The boats return to the harbour and the traditional hymn, ‘Salve Marinera’ is sung and the festivities continue along the waterfront with music and dancing well in to the early hours.