The next important period was the arrival of the English in the 1700s. They brought with them horses of thoroughbred blood, the influence of which can still be seen in the elegant heads and long legs of the Menorquina horses.

Thirdly, an in depth blood group study of the Menorquina has proved that there has been a significant influence from the North African Arabian Berber, introduced during the Moors’ occupation a thousand years ago. These horses combine the best of both breeds. They are robust, brave and loyal with nerves of steel inherited from the Berber while having the speed, endurance and beauty of the Arab horse. In fact, Berbers can be traced back to ancestors of the Iberian horses whose descendents also include the Andalusian breed.

There is no doubt that the Menorquina bears the closest resemblance to its mainland Spanish cousin, the Andalusian. Also known as the Pure Spanish Horse or PRE (Pura Raza Española), this breed developed in the Iberian Peninsula and has been recognised as an individual breed since the 15th century. Renown for its prowess as a war horse and prized by nobility, the PRE is strongly built and compact yet elegant with long, thick manes and tails.

However, the Menorquina also has some distinct characteristics of its own. To start with, the horses are smaller and have a lighter build with a more streamlined shape. The limbs are fine and long, and the head is quite small and neat with beautiful large round eyes.

What it does have in common with the PRE is a low-set tail, arched neck and despite having a muscular and powerful appearance it is naturally well balanced with light and elevated paces. One very distinct feature is that all purebred Menorcan horses are black in colour.

These beautiful horses are famous for their exciting performances at Menorca’s traditional fiestas.

Visitors to Menorca in the summer months will see the famous black stallions take part in the local saint’s day fiestas as they parade through the crowds, walk on their hind legs and gallop through the streets as part of the traditional mounted games and races.

These breathtaking performances are mainly due to the dedication of one man, Joan Pons Marti, who started the Club Escola Menorquina back in the 1940s.

Previously these horses were simply taken from their use as work horses on farms. But as horses were phased out from farm work when motorised transport started to take over in the 1960s, Joan Pons Marti and his team were able to train them as a dedicated job. His equestrian skills ensured both horses and riders were properly trained to buck under complete control.

Soon these horses began take on the airs of the purebred Menorquina horses, even though they had already been trained according to the style of the fiestas. Furthermore, they were able to perfect traits that had always been present in Menorca. The horses had always been made to gallop, but no one ever looked to see if the horse galloped with one hoof or another or even thought about how to tell the horse with which hoof to begin galloping. 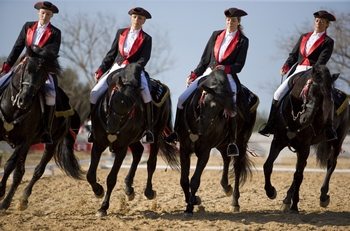 Drawing on other conventions, they were also able to introduce many improvements to the Menorcan discipline, such as the gallop, sideways or diagonal steps, pirouettes, or other movements. They realised that many disciplines considered to be international had in fact their origins in ancient traditions.

The combination of training and horsemanship skills combined with the horses’ own genuine excitement about taking part in the fiestas has to be seen to be believed, especially when they jump along on both hind legs for what appears to be ages. It doesn’t seem possible for the horses to maintain such an upright stance with riders firmly in the saddle for such long periods, not to mention the remarkable movement known as the ‘bot’.

The aim of the ‘bot’ is for the horse to stand on its hind legs while keeping its head and shoulders relaxed and without tension. The riders achieve this from a trot with little or no visible indication that it was about to happen and the horses are happy to perform this action in close groups amidst the exuberant crowds. At is that isn’t enough, the brave attempt to touch the horses’ heart for luck as they rear up!