So called due to their shape, which resembles an inverted boat, Navetas date back to the pre-talaiotic age. Located just west of Ciutadella, the Nateta d’es Tudons was built around 1400 BC and is the most famous of these structures. Built from large stones, with a small entrance in the west-facing façade, it has a two-storey interior and is the oldest roofed building in Europe. It is thought to have been a collective tomb as human remains and bronze jewellery were found during the excavation.

Found in both Menorca and Mallorca, there are almost 200 of these rounded, stone structures, built from large rocks without the use of mortar, dotted around Menorca. There function is unclear, some believe they were watchtowers and others that they were dwellings or burial places. The Talaiot at Trepuco is a particularly good example. Talaiots are generally located within walled settlements and close to Taulas. 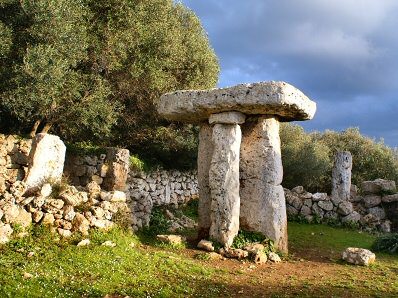 A Taula (Catalan for table) consists of two huge, rectangular, limestone slabs one vertical and the other placed horizontally across it in a T shape. Unique to Menroca, it is uncertain how the stones were cut or maneuvered into position. There are various theories to explain their purpose, for example sacrificial alters, roof supports or places of worship aligned with constellations. Taulas are usually found in a horseshoe shaped enclosure in close proximity to a Talaiot.