Over the weeks, normally starling late June, the acts will perform at various locations between about 20.30 and 23.00 hours.  Varied music styles will range from blues and jazz to classical, flamenco and fusion through to pop and funk. Each individual, group or band will play in one of the designated areas as you soak up the atmosphere and enjoy the music of your choice. The locations include Carrer ses Moreres, Plaça Bastión, Plaça Espanya, Claustre del Carme, Plaça Constitució, Plaça Colón, Plaça Esplanada and Sa Ravaleta. Some shops will also remain open beyond their usual hours for a little retail therapy to add to the evening holiday mood. 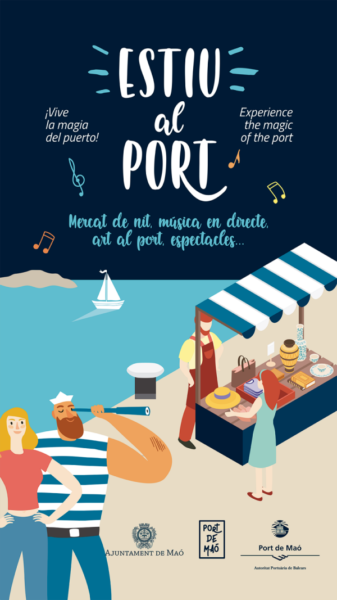 Then on Thursday evenings, the music and entertainment moves to the port where a fantastic schedule of musicians and groups are lined up over the coming weeks. Normally starling late June, the acts will perform at various locations along the harbour between 20.30 and 23.00 hours, when a section of the road will be closed.

The objective of both events is to bring a lively, cosmopolitan atmosphere to the capital, enabling people to walk freely along the pedestrianised areas between the bars, restaurants and shops and highlighting the town and port as commercial tourist attractions, that should not be missed. It is anticipated that there are some 80 musical performances during the eleven week period which runs up until the end of August.